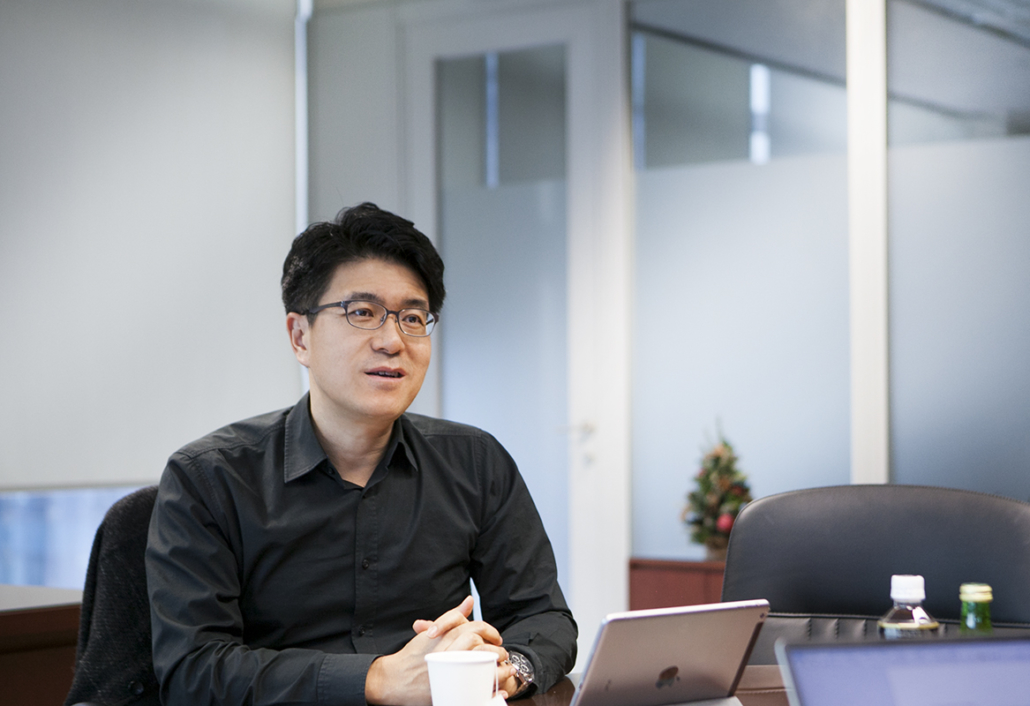 T-API 2.0 is a standardised interface, released in late 2017 by the ONF, that enables the dynamic allocation of transport resources using software-defined networking (SDN) technology.

The interface has been created so that when a service provider, or one of its customers, requests a service, the required resources including the underlying transport are configured promptly.

SDN technology is generally associated with the packet layer but there is also a need for transport links, from fibre and wavelength-division multiplexing technology at Layer 0 through to Layer 2 Ethernet.

Transport SDN differs from packet-based SDN in several ways. Transport SDN sets up dedicated pipes whereas a path is only established when packets flow for packet SDN. “When you order a 100-gigabit connection in the transport network, you get 100 gigabits,” says Jonathan Sadler, the OIF’s vice president and Networking Interoperability Working Group chair. “You are not sharing it with anyone else.”

Another difference is that at the packet layer with its manipulation of packet headers is a digital domain whereas the photonic layer is analogue. “A lot of the details of how a signal interacts with a fibre, with the wavelength-selective switches, and with the different componentry that is used at Layer 0, are important in order to characterise whether the signal makes it through the network,” says Sadler.

T-API 1.0 is a configure and step-away deployment, T-API 2.0 is where the dynamic reactions to things happening in the network become possible

Prior to SDN, control functions resided on a platform as part of a network’s distributed control plane. Each vendor had their own interface between the control and the optical domain embedded within their platforms. T-API has been created to expose and standardise that interface such that applications can request transport resources independent of the underlying vendor equipment. 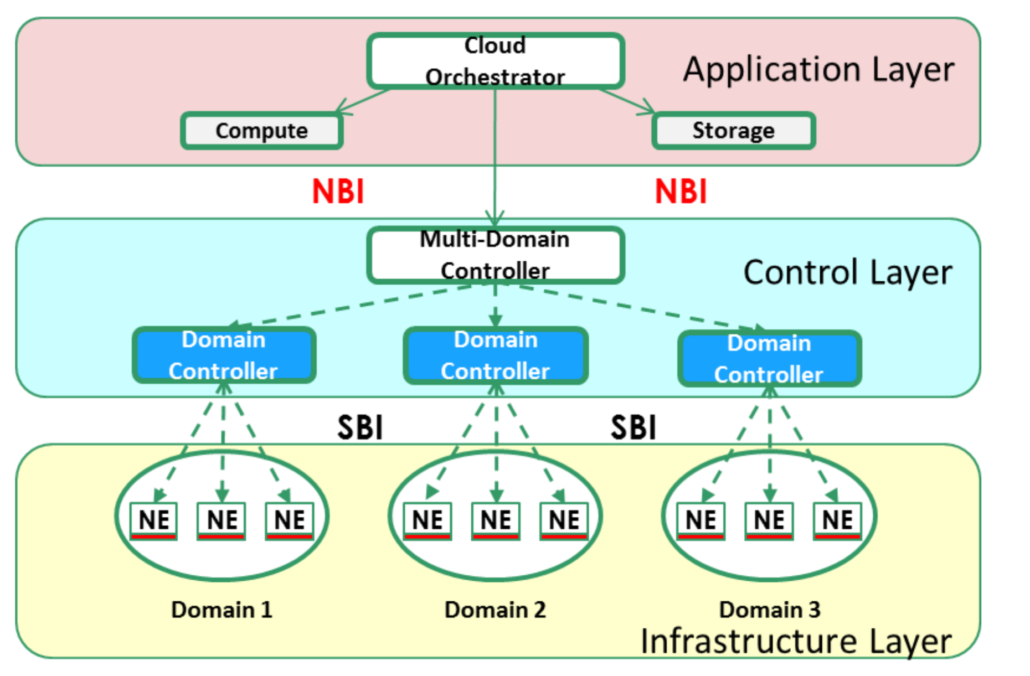 The same T-API 2.0 interface is used at both SDN controller levels, what differs is the information each handles. Sadler compares the upper T-API 2.0 interface to a high-level map whereas the individual TAPI 2.0 domain interfaces can be seen as maps with detailed ‘local’ data.  “Both [interfaces] work on topology information and both direct the setting-up of connections,” says Sadler. “But the way they are doing it is with different abstractions of the information.”

The ONF developed the first T-API interface as part of its Common Information Model (CIM) work. The interface was tested in 2016 as part of a previous interoperability demonstration involving the OIF and the ONF.

One important shortfall revealed during the 2016 demonstrations, and which has slowed its deployment, is that the T-API 1.0 interface didn’t fully define how to notify an upper controller of events in the lower domains. For example, if a link is congested, or worst, lost, it couldn’t inform the upper controller to re-route traffic. This has been put right with T-API 2.0.

“T-API 1.0 is a configure and step-away deployment, T-API 2.0 is where the dynamic reactions to things happening in the network become possible,” says Sadler.

When it comes to the orchestrator tying into the transport network, we do believe T-API will be one of the main approaches for these APIs

The recent tests focussed on the performance of the TAPI-2.0 interface under dynamic network conditions. Another change since the 2016 tests was the involvement of the MEF. The MEF has adopted and extended T-API as part of its Network Resource Modeling (NRM) and Network Resource Provisioning (NRP) projects, elements of the MEF’s Lifecycle Service Orchestration (LSO) architecture. The LSO allows for service provisioning using T-API extensions that support the MEF’s Carrier Ethernet services.

Three aspects of the T-API 2.0 interface were tested as part of the use cases: connectivity, topology and notification.

Setting up a service requires both connectivity and topology. Topology refers to how a service is represented in terms of the node edge points and the links. Notification refers to the northbound aspect of the interface, pushing information upwards to the orchestrator at the application layer. This allows the orchestrator in a multi-domain network to re-route connectivity services across domains.

The four use cases tested included multi-layer network connections whereby topology information is retrieved from a multi-domain network with services provisioned across domains.

T-API 2.0 was also used to show the successful re-routing of traffic when network situations change such as a fault, congestion, or to accommodate maintenance work. Re-routing can be performed across the same layer such as the IP, Ethernet or optical layer, or, more optimally, across two or more layers. Such a capability promises operators the ability to automate re-routing using SDN technology.

The two other use cases tested during the recent demonstration were the orchestrator performing network restoration across two or more domains, and the linking of data centres’ network functions virtualisation infrastructure (NFVI).  Such NFVI interconnect is a complex use case involving SDN controllers using T-API to create a set of wide area networks connecting the NFV sites. The use case set up is shown in the diagram below.

SK Telecom, one of the operators that participated in the interoperability demonstration, welcomes the advent of T-API 2.0 and says how such APIs will allow operators to enable services more promptly.

“It has been difficult to provide services such as bandwidth-on-demand and networking services for enterprise customers enabled using a portal,” says Park Jin-hyo, executive vice president of the ICT R&D Centre at SK Telecom. “These services will be provided within minutes, according to the needs, using the graphical user interface of SK Telecom’s network-as-service platform.”

SK Telecom stresses the importance of open APIs in general as part of its network transformation plans. As well as implementing a 5G Standalone (SA) Core, SK Telecom aims to provide NFV and SDN-based services across its network infrastructure including optical transport, IP, data centres, wired access as well as networks for enterprise customers.

“Our final goal is to open the network itself to enterprise customers via an open API,” says Park. “Our mission is to create 5G-enabled network-slicing-based business models and services for vertical markets.”

The OIF says the use cases have shown that T-API 2.0 enables real-time orchestration and that the main shortcomings identified with the first T-API interface have been addressed with T-API 2.0.

The OIF recognises that while T-API may not be the sole approach available for the industry – the IETF has a separate activity – the successful tests and the broad involvement of organisations such as the ONF and MEF make a strong case for T-API 2.0 as the approach for operators as they seek to automate their networks.

“When it comes to the orchestrator tying into the transport network, we do believe T-API will be one of the main approaches for these APIs,“ says Sadler.

SK Telecom said participating in the interop demonstrations enabled it to test and verify, at a global level, APIs that the operators and equipment manufacturers have been working on. And from a business perspective, the demonstration work confirmed to SK Telecom the potential of the ‘global network-as-a-service’ concept.

“In bringing together service providers and optical networking vendors to demonstrate new SDN deployment scenarios including dynamic-behavior use cases, the OIF in collaboration with MEF has taken another important step towards providing the foundation for service providers to efficiently deliver dynamic multi-domain connectivity services to market,” stated Heidi Adams, Senior Research Director, IP & Optical Networks, IHS Markit. “With the 2018 demo event, the T-API 2.0 interface from the Open Networking Foundation (ONF) is on its way to becoming a standard northbound interface (NBI) to SDN transport network controllers.”

OIF, in collaboration with MEF, is leading the industry toward the validation and widespread commercialization of T-API 2.0 from the Open Networking Foundation (ONF) as a standard northbound interface (NBI) to transport network controllers.

“The OIF SDN Interoperability demonstration has successfully brought together carriers, vendors and integrators with a common goal of moving to an open API (TAPI),” said Jack Pugaczewski, Distinguished Architect, CenturyLink. “T-API is a key enabler for providing automated service fulfillment and assurance. We have tested the Connectivity, Topology and Notification software patterns that T-API provides. Common APIs reduce design, development and deployment cycles for all involved, thus getting to market faster and realizing the financial benefits of automation.”

Additionally, two private events detailing the test results will be held with participating network operators: CenturyLink on July 10 in Denver, Colorado and China Telecom on July 19 in Beijing. Members of the media and analyst community interested in attending, please contact leah@wilkinson.associates.

“The OIF’s goal for interop events is to improve the quality and clarity of specifications being tested,” explained Jonathan Sadler, OIF VP and Networking & Operations Interoperability Working Group Chair. “As the tests were performed, we noted possible points for misunderstanding and places where the specifications may be enhanced. These results will be liaised to ONF and MEF for review at future meetings.”

A technical white paper and an executive summary of the demo result will be available in August.

An infographic of the demo is 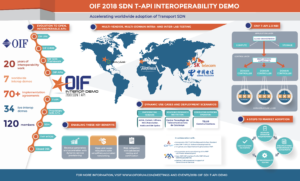 Committed to accelerating the commercialization of transport SDN worldwide, the Optical Internetworking Forum (OIF), in collaboration with MEF, will bring new dynamic behavior use cases and deployment scenarios into network operator labs around the world to test multi-vendor interoperability of the industry leading T-API 2.0 northbound interface (NBI) from the Open Networking Foundation (ONF). The 2018 Software-Defined Networking (SDN) Transport Application Programming Interface (T-API) interoperability demonstration builds on the OIF’s 2016 interoperability test and demonstration which addressed multi-layer and multi-domain environments as well as on the 2014 demo which prototyped the use of Northbound APIs and helped advance transport SDN standardization. For an infographic of the demo, click here.

“The OIF multi-vendor interop testing is particularly important to Telefónica’s network transformation. We are anxious to validate T-API as the standard NBI for Transport SDN and announce the results in June,” said Juan Pedro Fernández Palacios, Telefónica.

The results of the demo will be presented during a featured workshop and keynote presentation at NGON & DCI Europe 2018, the world’s leading strategic and technical optical networks event being held in Nice, France, and during two private events at participating network operator labs.

Optical Masterclass: Speakers will discuss how OIF is assuring interoperability in open, agile next generation optical networks and present updates on critical projects including CEI-56G and CEI-112G, FlexE 2.0, 400ZR and Transport SDN.

Additionally, Palacios, Head of Unit at Telefónica, will discuss the demo results and present use cases during his keynote presentation – Transport API: Standardization status, interoperability tests and use cases – on June 27th at NGON.

A technical white paper and an executive summary of the demo result will be available in August.

Additional information can be found at http://www.oiforum.com/meetings-and-events/2018-oif-sdn-t-api-demo/